Building and Strengthening Relationships in D.C. 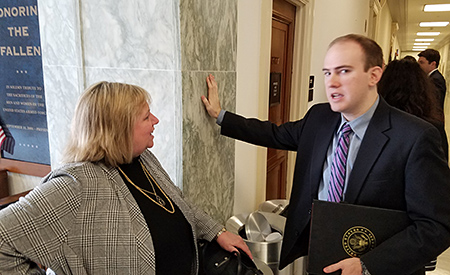 With the government shutdown over, the change of control in the House with new leadership, and Georgia with a new member of Congress, senior staff from GCUA traveled to D.C. last week to set the groundwork for the credit unions visits in early March for the CUNA GAC. And what a week it was to be in D.C. – the House Financial Services Committee held its first hearings of the new Congress (a full committee hearing on homelessness and a subcommittee hearing on challenges surrounding access to banking services for cannabis-related businesses) and the Senate Banking Committee held confirmation hearings for a few positions of interest to credit unions.

During the trip, staff visited with eight of the 16 Georgia Congressional offices – focusing attention on members and their staffs that serve on committees that will play a large role in the issues that matter to credit unions. 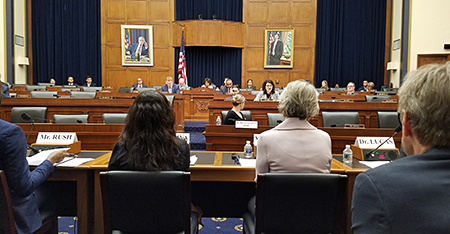 Staff visited with the staff of Rep. John Lewis (D-5) and spent some time with Rep. Drew Ferguson (R-3); both of these legislators serve on the Ways and Means Committee and the visits provided a window to gather intel on issues they expect the committee to address. In addition, GCUA met with staff from Georgia’s two members on the House Financial Services Committee (Rep. David Scott (D-13) and Rep. Barry Loudermilk (R-11)). Rep. Scott has a new aide who handles financial services – Catherine Kuerbitz – and this trip gave GCUA an opportunity to share the credit union difference as well as hear what she sees as issues that will be addressed in the committee. The time spent with Rep. Loudermilk’s office focused on his recent introduction of H.R. 388, which will update thresholds for CTRs and SARs. After sharing appreciation for their efforts to reduce regulatory burdens on financial institutions, the group discussed strategy for moving the legislation now that the Republican are in the minority in the House.

One of the highlights of the trip for GCUA was the rare window to attend a Senate Banking confirmation hearing for the two nominees for the NCUA Board, Rodney Hood and Todd Harper. Should both nominees be confirmed, NCUA will operate with a full Board for the first time in nearly three years. The confirmation hearing also included two additional nominations: Dr. Mark Anthony Calabria for director of the Federal Housing Finance Agency for a term of five years, and Bimal Patel to be an assistant secretary of the Treasury Department. Nearly every question asked by senators was directed at Calabria, with only a few questions for Hood and Harper, so their path looks positive. 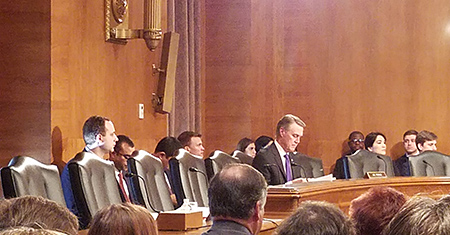 After attending the hearing, staff spent time visiting with CUNA staff on the advocacy agendas and ways for credit unions, Leagues and CUNA to work together to improve the operating environment for credit unions in the future. Advocacy is all about building relationships, and this trip was another important step in the continuing focus on our objective to help credit unions.

Don't be shy, get in touch. We love meeting interesting people and making new friends.

Why Should Your Credit Union Grow Connections with Legislators?

Why Does Your Credit Union Care About Elections?

Why Does My Credit Union Raise Funds?

Legislative Session Off to a Fast Start

Getting to Know the Team at the Statehouse

It’s that Time of Year: Time for PZC!

Washington, D.C.: Changing Players and Issues on a Federal Level

Building Relationships for the Future

Building Relationships for the Future: Meeting with Sen. Blake Tillery

Preparing for the Future: Creating Connections for Advocacy Success

Growing Relationships with Legislators in Districts

The End Is Near: State Legislative Session with One Week Remaining