Over 65 Georgia credit union advocates descended on the state Capitol this week on January 23rd for the 10th anniversary of the state GAC/Grassroots Academy!  The 2018 legislative term is already shaping up to be a chaotic session packed with legislative issues of interest to credit unions, and this event was the window for credit unions to learn about those issues and people, and what the industry can do to impact them.

Attendees heard firsthand from state leaders on what to anticipate in the legislative arena, gain the insider’s perspective on the political environment, and obtain tools to grow their credit unions’ legislative influence. The day included a packed agenda of insight from key influencers on the federal, state, regulatory, media, campaigns, and policy creation perspective: 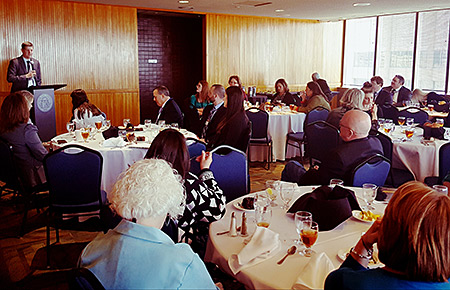 This day provided credit unions a thorough understanding of the legislative issues facing credit unions, insight into the 2018 elections, and provided the tools for credit unions to shape the future for the industry.  Please utilize the hashtag #CUGrassroots on social media to see the day as it unfolded.

Don't be shy, get in touch. We love meeting interesting people and making new friends.

Why Should Your Credit Union Grow Connections with Legislators?

Why Does Your Credit Union Care About Elections?

Why Does My Credit Union Raise Funds?

Legislative Session Off to a Fast Start

Getting to Know the Team at the Statehouse

It’s that Time of Year: Time for PZC!

Washington, D.C.: Changing Players and Issues on a Federal Level

Building Relationships for the Future

Building Relationships for the Future: Meeting with Sen. Blake Tillery

Preparing for the Future: Creating Connections for Advocacy Success

Growing Relationships with Legislators in Districts

The End Is Near: State Legislative Session with One Week Remaining